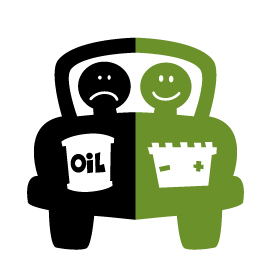 Lately environmental issues have dominated the activities of automotive producers. People start concerning about the amount of petroleum fuel we could have left. Every day billion gallons of fuel is consumed whether for industry or transportation. We do not know when it is going to be depleted. That is why automotive manufacturers start to shift their fuel consumption from gasoline or solar to other alternative energy such as electricity and bio-diesel. Others prefer to make cars with more fuel-efficient car without changing the source of fuel. The competition of hybrid cars and fuel economical mini cars started appearing. Which one would you choose? Hybrid cars use new technology to maximize the use of new and renewable source of energy, like electrical energy generated from wind power, earth’s heat, solar power or even bio fuel. This kind of car is no longer a concept. There are hundreds of models and millions of cars have been sold in some developed country like America, Germany, UK and Japan.
It combines two energy resources of conventional fuel and rechargeable electricity. There are some big differences and characteristic that differentiate hybrid car with conventional ones. It consists of two engines. Each of them uses different source of fuels: gasoline and electricity. The engine is usually made smaller than the conventional one to accommodate 99% of traveling time when it is not traveling uphill or speeding. When the car stops at a traffic light, the petroleum-fueled engine will be automatically stopped and replaced by the engine with rechargeable battery. Hybrid car is usually made lighter to make the engine’s work lighten. It will make the fuel consumption more efficient without wasted unused energy. This is the main feature of hybrid cars. Besides that, the emission disposed is much lower than conventional car. Hybrid cars are popularized by Toyota and Honda. Now every automotive producer is competing in making the best hybrid cars. Hybrid concept can also be applied to sports car. Porsche 918 Spyder is a great example of high performance sports car using hybrid concept.
Range of Mini cars choices are also ready to save the environment with more efficient fuel consumption. VW, the most famous Mini cars producer, has released new lines of fuel-efficient model. Although they have sporty look, having engine with small capacity makes the fuel consumption efficient. Most of the mini cars only have two seating or if it is not, there are mini cars that have four seating but only with two doors to come in. So you have to pull the front seat upward to be able to get to the back seat. Mini cars are designed as a great ride inside the city and the country side. It will not probably suit for long travel. Other producer such as Mini Cooper has their latest release. 2012 Countryman is the biggest Mini cars you can find today. Your choice of cars depends on what you need. So whether it is hybrid or Mini cars, the choice should have been a part of your green lifestyle.